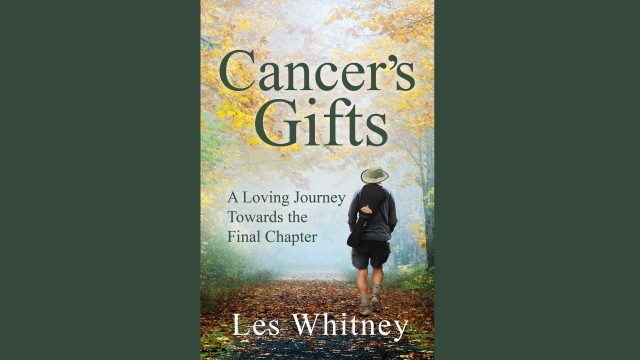 Les Whitney, a Vistage Chair of 17 years, is set to release his new book entitled Cancer’s Gifts: A Loving Journey Towards the Final Chapter. This moving story about facing death with grace and courage has already generated rave reviews from readers who are captivated by its message of hope, positivity & celebration during difficult times. The book is scheduled to launch on Friday, November 11, 2022.

This thought-provoking new book by Les describes his journey with cancer and how it has shaped who he is today while also sharing insights on what other people may need to help them through their battles against this disease. His story has inspired thousands, especially those fighting cancer themselves. He was diagnosed with stage IV lung cancer in 2019 but continues to inspire people today through his strength and perseverance.

Having cancer did not stop Les from living his life doing what he loves. and with the upcoming release of his new book, it’s time to share some hope. He wishes that others will be able to live a meaningful life and achieve their dreams regardless of the obstacles placed before them greatness just like how he did.

“I would love to leave behind some of what makes me me. If, in the process of doing that, I can help others, so much the better. The other audience I have in mind is those who are going through cancer themselves. This isn’t a how-to book or even a how-I-did-it book. However, by sharing my ups and downs, I hope I can show you that you’re not alone”, the author shared.

In line with his cancer journey, he created a blog where he shares very specific information about his treatments and conversations with his medical team. His blog not only allowed him to share his physical and emotional reaction to cancer treatments with the entire tribe but also gave readers a more intimate look into what it’s like being diagnosed with this disease.

You can check it here: https://www.caringbridge.org/public/leswhitney

“I am not afraid of the outcome of my cancer journey. We are going to get the result we are going to get,” Les said in one of his entry posts. “Our results will be a product of who I am today and the choices we make moving forward. I’m looking forward to the day I have tattooed on my ass, “I am a cancer survivor!” he added.

Les won “Rookie of the Year” from Vistage after his first year as a Chair and has been multiple times, the recipient of the “Chair Excellence Award.” Recently, Les was named one of the few Chairs around the world named “Master Chair,” based on his excellent performance with his three groups. Since 2008, Les has also trained other Vistage Chairs throughout the nation, helping them achieve maximum success in their roles

In early 2022, Vistage announced the first recipient of the “Les Whitney Award for Perseverance,” an annual award for Vistage chairs who have overcome adversity.

Be the first one to get a copy of Cancer’s Gifts: A Loving Journey Towards the Final Chapter through this link https://amzn.to/3UCd1zr

Disclaimer: The views, suggestions, and opinions expressed here are the sole responsibility of the experts. No Exact Observer journalist was involved in the writing and production of this article.

The news distributed here not just talks about the real occasion or improvement in any of the previously mentioned industry, yet in addition the result of the occasion that unfurls.

The prepared creators who are likewise showcase pros include their experiences and uncover the basic pattern behind the most recent occurring in an industry.